In addition to reading this guide, we recommend you run the Elasticsearch Health Check-Up. It will detect issues and improve your Elasticsearch performance by analyzing your shard sizes, threadpools, memory, snapshots, disk watermarks and more.The Elasticsearch Check-Up is free and requires no installation.

Run the Elasticsearch check-up to receive recommendations like this:

An indexing burst is affecting the performance of the following nodes

The node is unable to keep up with indexing requests, and as a result indexing requests are being queued. If the write queue reaches full capacity, index requests will be rejected, which may cause data loss if...

In order to resolve your indexing bursts, based on your specific ES deployment, we recommend that you...

What is the goal of Feature Migration APIs?

These APIs were created to simplify migration tasks and automate the migration process. The feature migration APIs simplify upgrading X-Pack indices from one version to another. This means that whenever you are upgrading your Elasticsearch cluster to a more recent version, you may be facing these types of issues:

The most important part of migration is data and removed settings at each level of Elasticsearch configurations (Index, Node, Cluster). Beyond this, in most major version updates of Elasticsearch, there are some important changes that affect your data and require you to do some corrections on your data mappings to fit the new version requirements.

For example, if you are currently using Elasticsearch version 7.15 and you want to upgrade to Elasticsearch version 8.2, you should consider revising all the security configuration since there have been some major overhauls. Also, adding new nodes to the cluster is not the same process as it was in previous versions.

How to retrieve information about deprecated settings

Before upgrading Elasticsearch you can use the Deprecation API to retrieve information about all settings at the:

When running the following command, you can glean some helpful information about deprecations:

There are two level of issues you may facing in response:

You can read more on deprecation here.

How to retrieve information about deprecated settings regarding features

Before doing anything, you should get acquainted with the deprecations concerning the  features you’re using in your current ES cluster version. This information will help you prevent serious problems from happening during your migration.This feature helps you retrieve information about system index deprecations for the next major version in Elasticsearch so be careful to use this data for any changes and any migrations.

The Feature migration API was added to Elasticsearch 7.17. Prior to that version, there was  only the deprecation info API we saw earlier.

Similarly to the Deprecation API, the Feature Migration API also shows you the upcoming deprecation of:

Below you can see the output of the system_features API call that shows you the deprecated feature name.

After running the command you may see that some migration is needed. 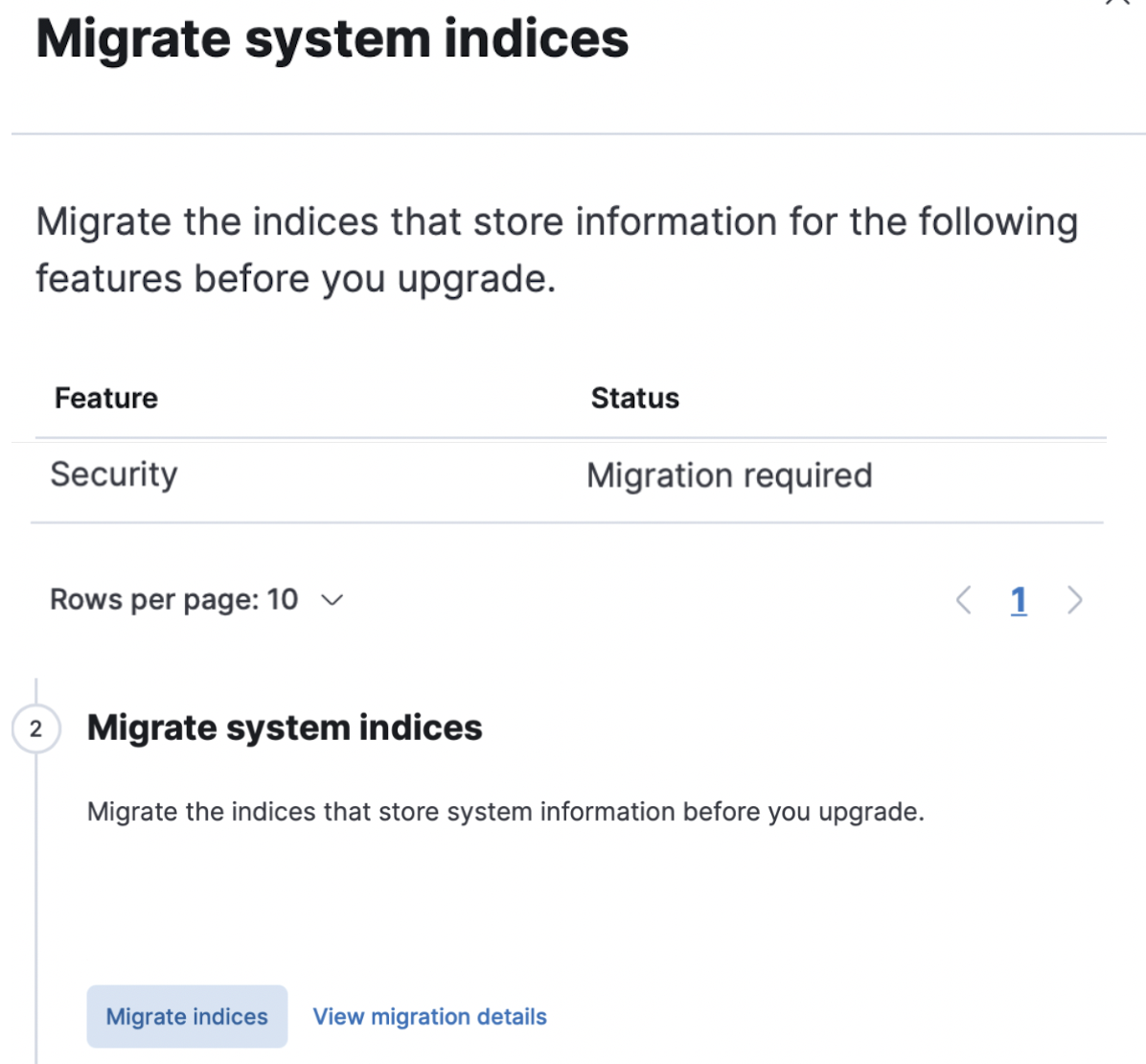 Based on the above output you can run the migration process by running the POST command below and it will update the features as needed.

In general, this feature is part of the “Kibana Upgrade Assistant” that you can use to upgrade your Elasticsearch cluster to the newer node and solve some system issues automatically:

Please take a look at the Upgrade Assistant screenshot below which demonstrates how the Feature Migration API can help you through the migration process (Elasticsearch, Kibana version 7.17): 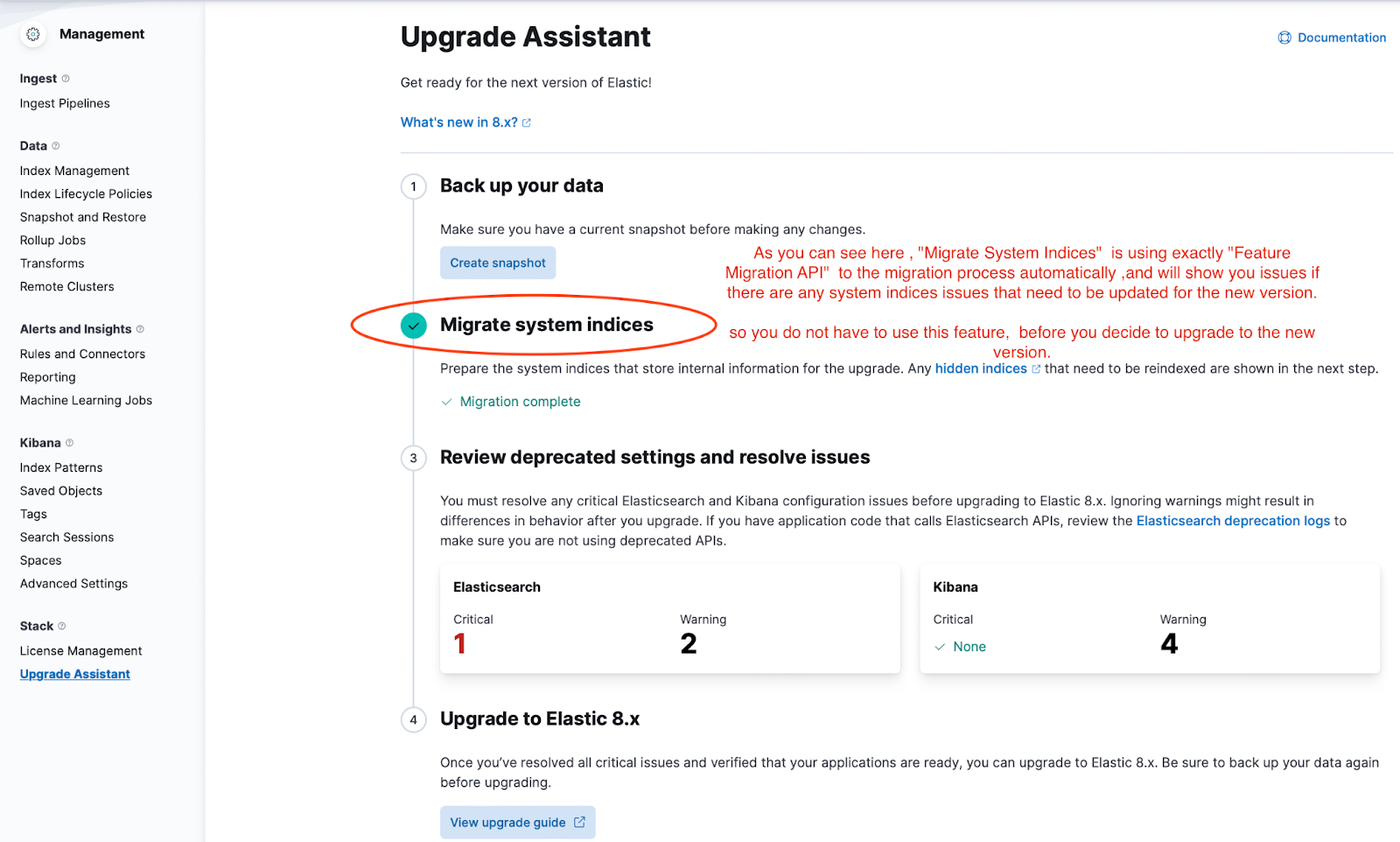 Always make sure to take a snapshot of your current data before you start your upgrade!

You cannot downgrade an Elasticsearch cluster after upgrading. If the upgrade process breaks for any reason, you will need to restore data from the snapshot.

BMC Launched a New Feature Based on OpenSearch